As many of you know, I am in the throes of competing in the 2014 March Madness Kids Poetry Competition!!!

It is an elimination competition and round one saw 32 of 64 contenders bite the dust! I barely made it to round two, where I am competing with the extremely talented Kathy Ellen. It’s merciless poetry cruelty! AND THE WORDS THEY ASSIGN!! Dilettante! Mellifluous! They give each contestant a different word that they must incorporate into it. Also, in most rounds there is a limitation on how many lines the poem can be. For round one and two, eight lines. Look through my poems. How many have eight lines or less?  Um one, maybe two? Most of them have twice as many. Ugh! 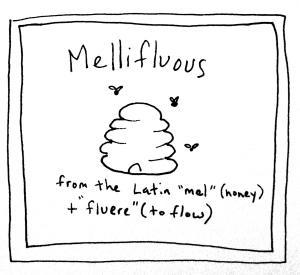 This round I was assigned the word mellifluous. I worked hard yesterday trying to write a worthy poem, a poem that kids and poets and the general populous will vote for. Here are my attempts:

Number One. I liked this one. I just didn’t have complete confidence in it.

But with a girl as dumb as a brick

He said, “You sound mellifluous.”

She said, “Well, then why not say that?”

They broke up. She thought he meant fat.

Number Two. This was my “sell-out” poem where I purposely incorporated pop culture in order to impress 5th graders. In the end, there was too high a chance that some references might be missed. I still like it anyway.

I know it’s not right to cheat on a test

This vocab quiz, though, was tougher than most

Just this once I sent my brother a text

I knew if I failed, my grade would be toast

He sent back: ONE SEC. PLAYING CALL OF DUTY.

He was in college. I knew he would know

Till he replied: VILLAIN FROM SLEEPING BEAUTY

Number 3: And then I wrote this! I thought it was for sure the winner…until I realized it had TEN lines. UGH!!!!!!!

High in the hills were magic bees with honey so delicious

To anyone who ate some, the bees would grant three wishes

Mellifluous climbed the hill, but tripped and took a dive

She fell right toward those magic bees, her head stuck in their hive

The bees asked her, “What do you want (and don’t eat all the honey!”)

“To be graceful with a beautiful voice and big fat pile of money!”

All at once she could sing and dance, her transformation complete

And to this day Mellifluous means rich and smooth and sweet.

Well, I tried to edit it, but it just wasn’t working, so I kept most of the elements and started from scratch re-writing it. You can see the final poem that I submitted here.  So, which one did you like best? The one I entered into the competition, or one of the ones above? Let me know in the comments. 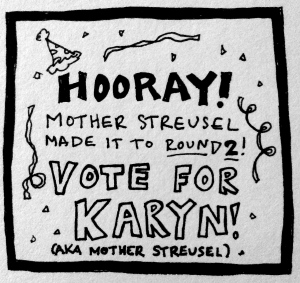 8 thoughts on “Karyn Linnell, AKA Mother Streusel, Made It To Round TWO!!!!”